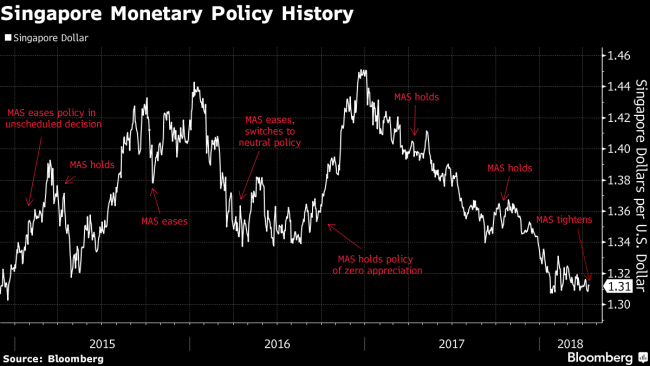 Singapore’s central bank made a measured change to policy, allowing its currency to strengthen in the face of solid economic growth, while also acknowledging mounting risks from a U.S.-China trade war.

The Monetary Authority of Singapore, which uses the exchange rate as its main policy tool, increased the slope of the currency band slightly from zero percent, it said in a statement on its website. That was in line with the forecasts from the majority of economists in a Bloomberg survey.

The central bank is moving away from the easing stance adopted in recent years -- like policy makers from the U.S. to South Korea have done -- as growth in the export-led economy strengthens and inflation continues to pick up slowly. With a trade war brewing between Singapore’s two largest trading partners, the MAS signaled a gradual approach to tightening.

“The MAS sounds pretty cautious, even though they are normalizing the policy,” said Francis Tan, an economist at United Overseas Bank Ltd. in Singapore. “They were still appreciative of the possible risks,” especially on trade and “because of that, in October I think they should still maintain” the stance, he said.

While growth in the export-reliant nation is still seen within the 1.5 percent to 3.5 percent range this year, still largely driven by trade-related industries, “an escalation of the U.S.-China trade dispute remains possible, and if it occurs, will have significant consequences for global trade,” the MAS said.

Gross domestic product grew 4.3 percent in the first quarter from a year ago, in line with the median estimate in a Bloomberg survey, preliminary data from the trade ministry showed on Friday.

Inflation has picked up recently even though it remains at subdued levels. The MAS said the core measure -- which rose to 1.7 percent in February -- will come in at the upper half of its 1 percent to 2 percent forecast range this year.

Read More: A Central Bank With No Key Rate? Yes, in Singapore: QuickTake

Singapore isn’t the first in Asia to tighten in this cycle -- South Korea did so in late 2017, and Malaysia in January -- but most aren’t in a rush to move. The Bank of Thailand voted 6-1 in a March 28 decision for no change in policy with below-target inflation and a surging currency. The Philippines held its benchmark interest rate at a record-low 3 percent on March 22, while India kept its rate unchanged last week.

The MAS “did mention that it’s a measured adjustment to the policy stance, and they do acknowledge the uncertainty in the external environment, given trade tensions,” said Khoon Goh, head of Asia research at Australia and New Zealand Banking Group Ltd. in Singapore, who had predicted the MAS would hold its neutral stance. “That suggests to us that the slope is more gradual than in the past when they have tightened.”