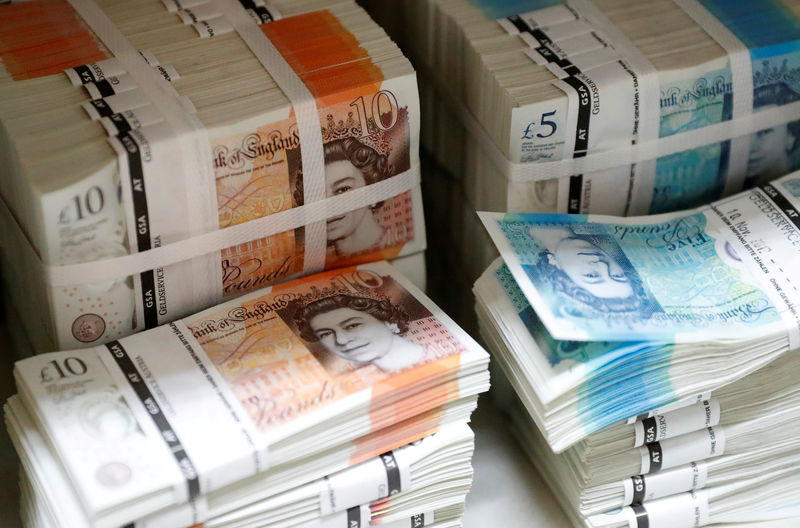 Having sunk to 13-month lows, sterling could fall by up to another 10 percent in the coming months should Britain crash out of the European Union without a deal on future trade ties, luring more speculators to bet against the currency.

The moves were certainly exacerbated by a big and broad dollar rally, and the pound has since clawed back the worst of its losses against the euro, rebounding from 10-month lows (EURGBP=D3).

But the worry, say analysts, is that in the absence of any conclusive developments towards a deal over the coming months, the pound's spiral will accelerate while the clock ticks down on the deadline and hedge funds are tempted into betting against the currency.

And muddying the horizon are major political events - Prime Minister Theresa May's Conservative Party conference in early October, and meetings of EU leaders in late September and then mid-October.

"There's no guaranteed date for when Brexit progress or hard Brexit will be known by apart from exit day on 29 March 2019," Nomura analysts told clients, describing a "hard Brexit" as a "cliff edge" moment in which Britain crashes out of the EU in March 2019 without any future trading arrangements in place.

"We find that we are very much in the early stages of pricing for a hard Brexit."

How will sterling trade in the later stages, then?

Most economists still believe Britain will reach a deal with the EU. But the latest Reuters polls indicate risk of no deal have risen to 25 percent, versus 20 percent in July.

Some bookmakers price even higher odds, above 40 percent.

If that comes to pass, Britain's currency would crash to $1.20 - from today's $1.2750 levels, the Reuters poll showed, a fall of around 6 percent. But sterling is forecast to rise to $1.34 by end-January if an agreement is reached.

Others predict more precipitous falls - Commerzbank (DE:CBKG) sees a 10 percent drop against the dollar and euro. That would leave the pound close to parity with the single currency, below post-Brexit referendum lows of 94 pence and current levels of 89.2 pence.

The uncertain outlook and the prospect of a sudden sterling surge had kept many hedge funds on the sidelines. Now though, sensing profits to be made, some funds have begun to wager against the pound. Prominent Brexit campaigner and hedge fund boss Crispin Odey told Reuters he was betting against sterling.

Concern may be mounting at the corporate level too. A senior currencies trader at a large European bank said British exporters had rushed to hedge themselves, while speculators were using options to short the pound in increasing numbers.

"Below the $1.30 mark is where corporates start to get nervous," the trader said, speaking on the condition of anonymity. "Hedge funds have been buyers of sterling on the dips but that's starting to change. If it weakens further, we will see some accelerated selling."

Perhaps reflecting that shift, the price investors are prepared to pay for the future right to sell sterling has rocketed.

'Call' options give the right to buy.

GRAPHIC - Demand for options to sell sterling climbs to highest since Jan 2017: https://reut.rs/2MfsQg0

Should Britain retain close trading ties with the EU, the pound could jump towards its post-Brexit referendum high of $1.4377 reached in April. A Brexit on these terms would also clear the path for the Bank of England to tighten monetary policy further.

Sterling also looks cheap, according to some historical measures.

Under the purchasing-power parity, or PPP, theory, which compares the prices of a basket of goods, sterling/dollar should trade at $1.61, and euro/sterling at 80 pence.

"Sure, there is gloom now but the currency remains undervalued as it has been historically," said Geoffrey Yu, Head of UK Investment Office at UBS Wealth Management. "Some [buyers] will see this as an opportunity."