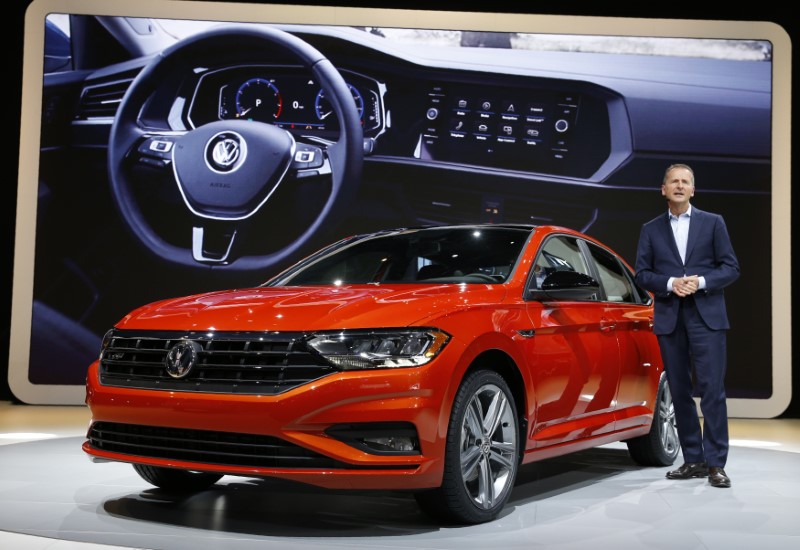 BERLIN/HAMBURG (Reuters) - Volkswagen (DE:VOWG_p) is seeking to replace Chief Executive Matthias Mueller with the head of its core brand, Herbert Diess, as part of a broader overhaul of its management structure to boost efficiency, two people familiar with the matter said.

VW, still struggling to put its 2015 diesel emissions scandal behind it, said earlier on Tuesday it could replace Mueller as part of a management revamp. The shares jumped on the news and were up 4 percent at 170.72 euros at 1325 GMT.

It is unclear how soon Diess, a former BMW (DE:BMWG) executive who joined VW in July 2015, would replace Mueller.

The contract of Mueller, 64, who took the reins at VW a week after the "dieselgate" scandal broke in September 2015, runs out in 2020.

"Volkswagen considers a further development of the management structure of the group which would also be associated with personnel changes in the board of management," VW said in its statement.

Two people close to the carmaker said that VW's supervisory board was due to meet on Friday and would also discuss efforts to pave the way for the IPO of VW's truck and bus division.

Europe's largest automotive group has been considering measures to make itself more nimble, including carving out truck operations via a stock sale, as it spends billions of euros on electric cars and new mobility services.

Diess, 59, has been pushing restructuring at the VW brand and repeatedly clashed with powerful labour unions over cost reductions.

"If Diess is confirmed as the successor, VW shares will extend their gains," Evercore ISI analyst Arndt Ellinghorst said, who has an "outperform" rating on the stock.

"We see no better alternative to Matthias Mueller to make the company fit for the future."

The management upheaval contrasts with a strong operating performance at the carmaker which last year posted record auto sales and profit.

But the persistent tug of war between VW's controlling families, unions and stakeholders have made it difficult to effect structural change that investors have said is key to VW fulfilling its potential.

Mueller had expressed his general willingness to participate in the changes, VW said on Tuesday, but added that it was still to be determined whether efforts to develop a new leadership structure would leave him in place.

Chairman Hans Dieter Poetsch is currently in talks about changing the structure with fellow supervisory board members and members of the management board, VW said.

Two months ago, sources close to the top management of VW told Reuters that Mueller was growing frustrated with a lack of support for his reform efforts and by the company’s inability to draw a line under its emissions scandal.

Volkswagen declined to comment on whether the board was poised to name Diess as new CEO. The works council, whose members occupy half the seats on the supervisory board, also declined comment.