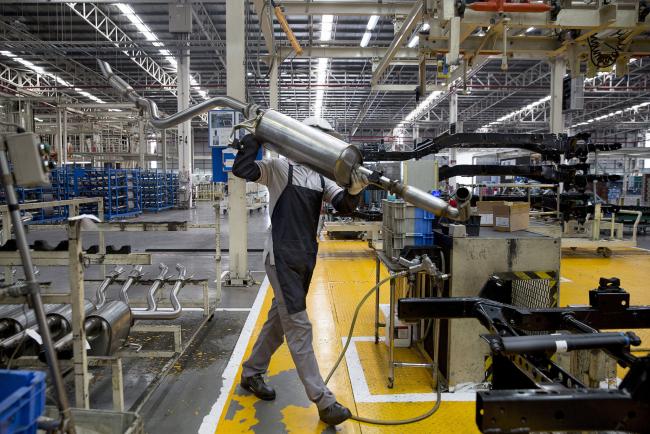 © Bloomberg. A worker prepares to install an exhaust pipe on the chassis of a Nissan Motor Co. Navara pickup truck on an assembly line at the company's plant in Samut Prakan, Thailand, on Tuesday, April 25, 2017. Nissan andÂ Mitsubishi Motors Corp.Â still have a small presence in Southeast Asia and the two alliance partners can target to at least double their current market share, saidÂ Carlos Ghosn, whoâs chairman of both companies.

The Japanese automaker is the latest to target Kenya after Volkswagen (DE:VOWG_p) AG, PSA Peugeot and CNH Industrial NV announced plans for assembly lines in the past 18 months. The facilities could cut new-vehicle costs to customers in some of the continent’s fastest-growing economies, where vehicle ownership per thousand people is about a quarter of the global average.

Outside of South Africa, there isn’t much automotive manufacturing on the continent because of challenges such as the volume of imported used cars, few vehicle-financing options and a patchy road network.

Nissan will initially put together pick-up trucks from semi-knocked down kits, or SKDs, if the government agrees to waive a 25 percent import tax, according to Jim Dando, director of Africa operations for Nissan.

“We’re prepared to enter Kenya as an SKD assembler,” Dando said by phone from South Africa’s capital, Pretoria. “We’re keen to move quite fast. We want to make this happen.”

Volkswagen, which returned to Kenya last year after a four-decade absence, is producing its Polo Vivo model from SKD kits.

Nissan will submit a proposal to the government once market studies and due diligence assessments are complete, and may have an operational assembly line by the end of 2019 if it receives a green light. The company would work at an established plant, which would cost it about $20 million, rather than setting up its own facility, Dando said.

Investing in an existing plant for completely knocked-down kits, or CKD, would require as much as $100 million while a new factory would cost double that amount. Nissan prefers starting with half-finished vehicles as it builds market share and a skilled workforce, Dando said.

Once established, the Kenyan facility will feed the Eastern Africa market, which is currently served by imports of light trucks from South Africa with other models coming from Japan. In addition to its plant in South Africa, Nissan has an assembly line in Nigeria.

The decision to begin assembling 1-ton pick-up vehicles is because Kenya’s new-vehicle market is dominated by light commercial trucks. One-ton single-cab trucks made up almost 12 percent of all new purchases in Kenya last year, according to the Kenya Motor Industry Association.

While there’s great potential in the passenger-vehicle category the segment is inundated with cheaper second-hand imports, Dando said. Public-transport vehicles in Kenya are colloquially known as Nissan no matter their make, as the first imports of the privately owned minibuses in the early 1990s were usually used models from Japan.

Nissan is also “looking cautiously” at Zimbabwe and Ethiopia as potential countries for local assembly, but has no timelines and is yet to make decisions on those markets. Many African economies have hit a rough patch, making them unattractive as manufacturing bases, Dando said.

“There isn’t much scope in Africa to start an assembly plant” in addition to those it already has beyond Kenya currently, he said.