China denies it has offered a $200 billion package to slash U.S. trade gap 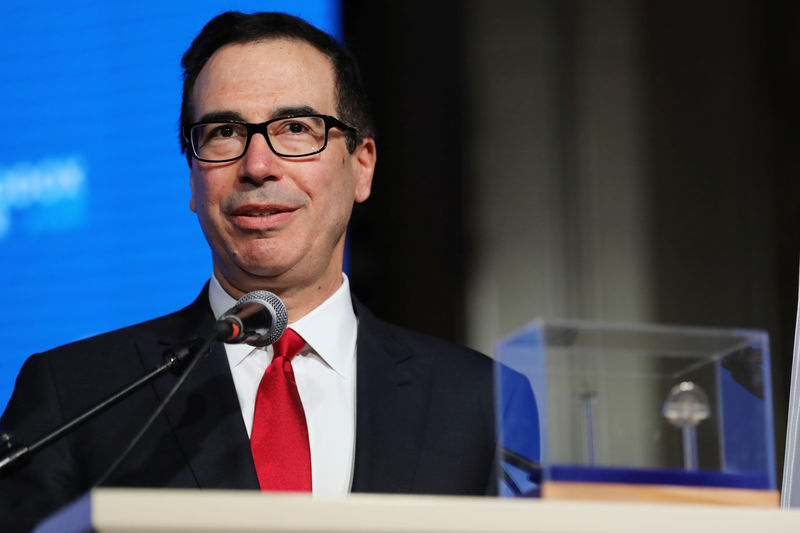 China denied on Friday that it had offered a package to slash the U.S. trade deficit by up to $200 billion (148 billion pounds), hours after it dropped an anti-dumping probe into U.S. sorghum imports in a conciliatory gesture as top negotiators meet in Washington.

U.S. officials had said on Thursday that China was proposing trade concessions and increased purchases of American goods aimed at cutting the U.S. trade deficit with China by up to $200 billion a year.

"This rumour is not true. This I can confirm to you," Chinese foreign ministry spokesman Lu Kang told a regular news briefing.

"As I understand, the relevant consultations are ongoing and they are constructive," he said, adding that he could not elaborate on the specifics of the negotiations.

Chinese Vice Premier Liu He is in Washington this week for talks with U.S. officials led by U.S. Treasury Secretary Steven Mnuchin aimed at heading off a trade war between the world's two biggest economies.

Earlier on Friday, China announced that it was ending its sorghum investigation, which had effectively halted a trade worth roughly $1.1 billion last year and roiled global grain markets and spurred worries about rising costs domestically.

The United States is China's dominant source of imported sorghum, a product grown in states such as Texas and Kansas that lean towards Trump's Republican party, whose Congressional majorities are under threat in mid-term elections in November.

Explaining the dropping of the sorghum investigation, China's commerce ministry said it "would have a widespread impact on consumer living costs, and does not accord with the public interest".

Getting to a $200 billion reduction of the U.S.-China trade deficit on a sustainable basis would require a massive change in the composition of commerce between the two, and the news from the unidentified U.S. officials in Washington had been met with scepticism from economists.

"That's an enormous number and it suggests that there could be some impressively ambitious accounting," said Scott Mulhauser, a former chief of staff at the U.S. Embassy in Beijing and U.S. Export-Import Bank official who now advises companies on trade.

One U.S. source said earlier that U.S. aircraft maker Boeing Co (N:BA) would be a major beneficiary of the Chinese offer to narrow the trade gap if Trump were to accept it. Boeing is the largest U.S. exporter and already sells about a quarter of its commercial aircraft to Chinese customers.

Another person familiar with the talks had said the package may include some elimination of Chinese tariffs already in place on about $4 billion worth of U.S. farm products including fruit, nuts, pork, wine - and sorghum.

A White House statement described the meetings as part of "ongoing trade discussions" and said Trump met the Chinese delegation led by Liu and the U.S. team led by Mnuchin.

"The United States officials conveyed the president's clear goal for a fair trading relationship with China," the White House said.

That top-line number in the reported Chinese offer would largely match a request presented to Chinese officials by Trump administration officials in Beijing two weeks ago.

The two biggest U.S. exports to China were aircraft at $16 billion last year, and soybeans, at $12 billion.

The United States shipped 4.76 million tonnes of sorghum to China in 2017, worth about $1.1 billion, accounting for the bulk of Chinese imports of the grain used in animal feed and Chinese liquor.

In April, China forced U.S. sorghum exporters to put up a 178.6 percent deposit on the value of sorghum shipments to the country after launching an investigation in February following Trump's imposition of steep tariffs on imports of solar panels and washing machines.

"China has taught a lesson to the United States and showed how it can hurt U.S. exports," said Ole Houe, director of advisory services at brokerage IKON Commodities in Sydney.

"Now they are showing goodwill by halting its anti-dumping investigation into sorghum imports, but it is a cheap way of showing goodwill as the U.S. doesn't have much sorghum left to export. The next U.S. sorghum crop will be harvested in August,” Houe said.

Trump has threatened to impose tariffs on up to $150 billion of Chinese goods to combat what he says is Beijing's misappropriation of U.S. technology through joint venture requirements and other policies. Beijing has threatened equal retaliation, including tariffs on some of its largest U.S. imports, including aircraft, soybeans and autos.