Australian Open to go ahead despite players' quarantine anger 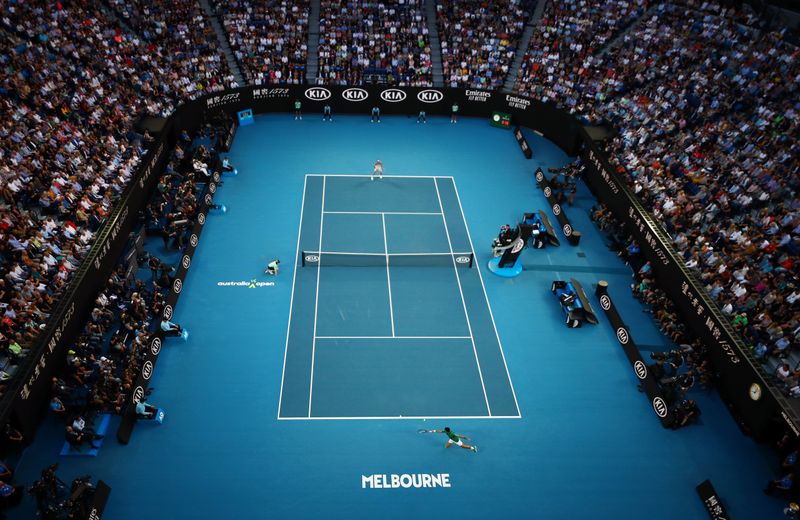 MELBOURNE - Australian Open tournament director Craig Tiley has confirmed the year's first Grand Slam will go ahead from Feb. 8 despite anger from players forced into hard quarantine in Melbourne due to positive COVID-19 cases on their charter planes.
Seventy-two players and their entourages have to isolate for two weeks in their hotel rooms in Melbourne and are no longer able to leave them to train after infections were reported on three flights carrying them to Melbourne.
A positive case was reported late on Sunday from the third flight which landed a day earlier and had ferried 58 passengers from Doha, where the Grand Slam's qualifiers were held.
Twenty-five players were on board but the passenger, who tested negative before the flight, is not a player.
"The 25 players on the flight will not be able to leave their hotel room for 14 days and until they are medically cleared. They will not be eligible for practise," the Australian Open said in a statement https://twitter.com/AustralianOpen/status/1350789626705788929.
Other players who arrived in different planes are also undertaking a mandatory 14-day quarantine but are permitted to leave their hotels for five hours a day to train, raising questions about the integrity of the Grand Slam.
Tiley said the tournament would start as scheduled but governing body Tennis Australia would look at altering the leadup tournaments to help affected players.
"We are reviewing the schedule leading in to see what we can do to assist these players," Tiley told the Nine Network on Sunday.
"The Australian Open is going ahead and we will continue to do the best we possibly can do to ensure those players have the best opportunity."
Earlier, quarantine authorities said they had recorded a fourth COVID-19 infection among the passengers on the two charter flights carrying players to Melbourne.
A broadcaster on the flight from Los Angeles had tested positive, adding to an aircrew member and a tennis coach on the same plane who were reported on Saturday.
The other case was Sylvain Bruneau, the coach of Canadian Bianca Andreescu, the 2019 U.S. Open champion. Bruneau was a passenger on a charter flight carrying 23 players from Abu Dhabi.
'I WOULD HAVE STAYED HOME'
Some of the affected players complained about their detention.
Romanian Sorana Cirstea, the women's world number 71, said on social media: "If they would have told us this rule before, I would not play in Australia. I would have stayed home."
Swiss player Belinda Bencic said she and the other 46 players were at a disadvantage.
"We are not complaining (about being) in quarantine. We are complaining because of unequal practice/playing conditions before quite important tournaments," she said.
COVID-19 Quarantine Victoria boss Emma Cassar said authorities had provided consistent advice.
"The rules for close contacts haven't changed," she told reporters in Melbourne on Sunday. "The program is set up to keep people safe."
Cassar also warned players to stick to quarantine rules and threatened them with A$20,000 ($15,400) fines and having them moved to an even stricter facility after two players made low-level breaches, opening their hotel room doors to talk to others.
"So they've been warned and Victoria police will continue to follow up," she added.