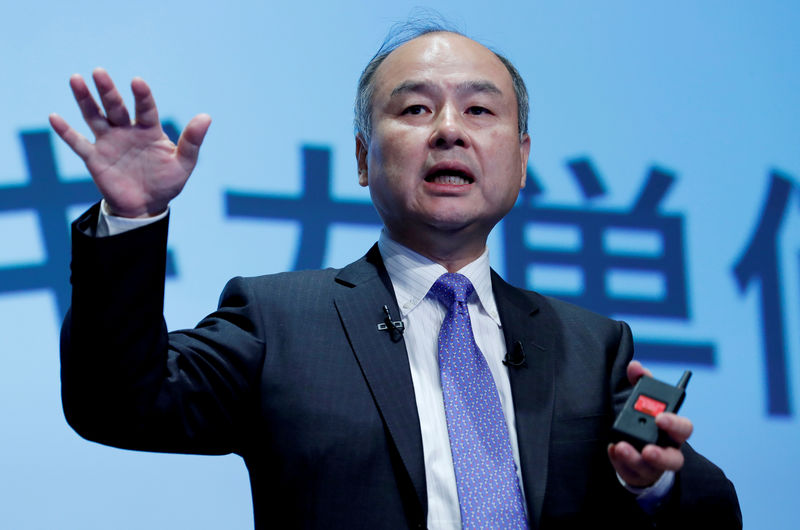 Fresh from the WeWork debacle, SoftBank CEO Masayoshi Son says he now aims to be more cautious about the timings of IPOs, a shift that could squeeze the Japanese company's funding and increase its reliance on its lower-growth telecom business.

"I have started to think we should be more cautious on timings for IPOs of companies like WeWork, Uber and Slack," Son said late on Wednesday after admitting to poor judgement over WeWork. His company spent more than $10 billion to bail out the startup after an IPO (initial public offering) attempt flopped.

However, the billionaire boss stressed that several companies from the fund's portfolio would go public in both 2020 and the year after. SoftBank is counting on new listings to raise cash for its recently announced second Vision Fund, to which it has committed to invest $38 billion.

The slower IPO approach is likely to increase SoftBank Group's reliance on its telecoms unit SoftBank Corp (T:9434), according to analysts. The business accounted for nearly a third of the conglomerate's operating income in the last financial year.

While the telecom firm's income has helped insulate the group from losses at the Vision Fund, the unit is the smallest of the three main wireless operators in Japan, a rapidly ageing market with limited prospects for growth.

So despite being a globe-spanning business with ties to Saudi Arabia, Silicon Valley and Wall Street, SoftBank's fortune rests to large degree on a Japanese base of 23 million mobile subscribers, plus retail investors who snap up its junk-rated bonds aimed at fans of its SoftBank Hawks baseball team.

Son's comments about office-sharing firm WeWork were remarkable admissions for an executive well known for his ebullience.

"My investment judgment was poor in many ways," the 62-year-old said after SoftBank Group plunged to its first quarterly loss in 14 years on Wednesday, adding he had turned a blind eye to problems with WeWork co-founder Adam Neumann.

WeWork was not the first setback involving SoftBank investments and stock market debuts.

Shares in ride-hailing app Uber Technologies (N:UBER) have fallen by more than a third since its listing. Shares of Slack Technologies (N:WORK), which develops productivity software, have tumbled by almost half.

Dan Baker, a director of equity research at Morningstar, said there was a gap between what private markets were willing to pay for these businesses and what the public market would pay.

"If they are to delay IPOs then the company will be relying on the dividends from SoftBank Corp," Baker said.

SoftBank Corp has committed to paying out 85% of its profits as dividends. As such, the telecom company is closely watched by investors as an indicator of the health of its parent.

SoftBank Group is also cushioned by a 26% stake in China's Alibaba Group (N:BABA), worth about $120 billion, which could be sold off if it needs to raise cash in a hurry.

SoftBank Group has 5.5 trillion yen (£39.2 billion) in outstanding bonds and another 4 trillion yen in bank loans, according to Refinitiv data. Its weighted average cost of debt is 3.7%, the seventh-highest among all companies on the Nikkei 225 Stock Average .

Moody's calculations show the conglomerate's interest coverage ratio is 1.3, meaning group income is enough to service its debt, with some left over.

The telecom unit was a rare bright spot in SoftBank's earnings this week, reporting a 9% increase in second-quarter operating profit. In that July-September period, it contributed 284 billion yen ($2.6 billion) in operating income to SoftBank Group.

The wider group itself posted an operating loss of 704 billion yen, with its Vision Fund losing 970 billion yen.

It was unclear precisely how SoftBank Group's listings timeline would now be governed, but Son stressed that portfolio companies would remain active in the IPO market.

"There are companies in our group that have started making money or are about to make money soon," he said. "For those companies, they make decisions, and we will support them. That's the case. So next year and the year after that, several portfolio companies every year should go public.

"That's the direction that we will keep."

Testuro Ii, president of Commons Asset Management, which does not hold SoftBank shares, sounded a note of caution.

"Including Uber and WeWork, there are now many unicorns which have done IPOs but are struggling to make profits and whose valuations are being questioned," he added.