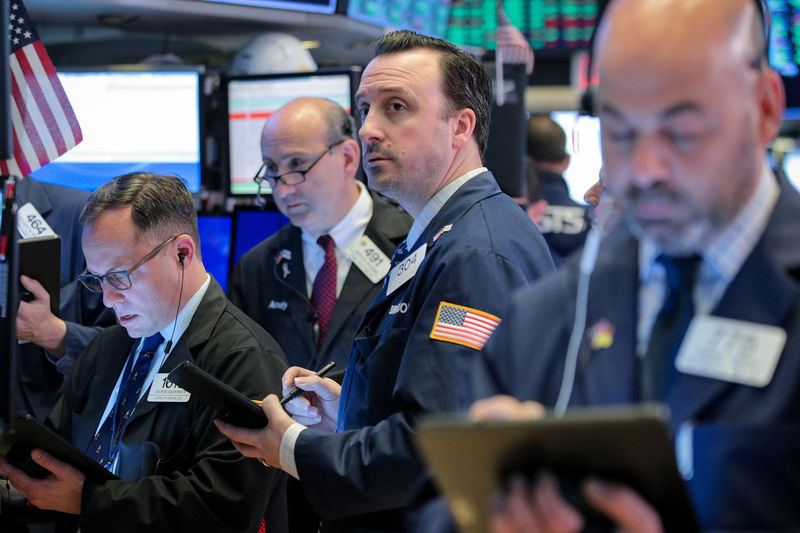 U.S. stocks fell on Monday, as a crackdown on China's Huawei Technologies raised concerns of a bigger impact on chipmakers and added to fears of an escalation in trade war between the two nations.

The iPhone maker was also pressured by a warning from HSBC that higher prices for the company's products following the increases in tariffs could have "dire consequences" on demand.

U.S. suppliers of Huawei, including Qualcomm (NASDAQ:QCOM), Micron Technology (NASDAQ:MU) and Broadcom (NASDAQ:AVGO) Inc, fell about 5%, while the Philadelphia Semiconductor Index slid 2.88%, its lowest level in over two months.

"For a lot of these tech companies, there is no bigger market than China and there is some concern it could forestall growth, also forces countries to take sides and begin to allow China to develop alternatives," said Rick Meckler, partner at Cherry Lane Investments in New Vernon, New Jersey.

"It's a lot of speculation and there isn't any basis. But it looks like the trade talks are getting worse and not better."

Huawei, the world's largest telecoms equipment maker, was added to a trade blacklist by the Trump administration on Thursday, escalating the already bitter trade war, while China on Monday accused the United States of harboring "extravagant expectations" for a trade deal.

Alphabet (NASDAQ:GOOGL) Inc's Google has suspended some business with Huawei, Reuters reported over the weekend, while chipmakers including Intel Corp(NASDAQ:INTC), Qualcomm, Xilinx Inc (NASDAQ:XLNX) and Broadcom have told employees that they will not supply the Chinese company until further notice, Bloomberg reported on Sunday.

Shares of Alphabet, Facebook Inc (NASDAQ:FB) and Microsoft Corp(NASDAQ:MSFT) were all down over 2%.

In a bright spot, Sprint Corp shares jumped 23%, while T-Mobile US Inc gained 5.2% after the companies won support of the U.S. telecoms regulator chairman for their proposed $26 billion merger.

Investors will also look for comments from a clutch of retailers reporting this week including Home Depot (NYSE:HD), Nordstrom (NYSE:JWN), Kohl's and Target(NYSE:TGT) for comments on the impact of the latest round of tariffs.

With 460 of S&P 500 companies having posted first-quarter results, 75.2% have topped analysts' profit expectations. Analysts now expect first-quarter earnings growth of 1.4%, a sharp turnaround from the 2% loss expected on April 1, according to Refinitiv data.